Members of the Transdisciplinarity Lab (TdLab) at ETH Zurich

Dear BinBin, dear Michael, what is your understanding of transdisciplinarity (Td)?

Pearce For me, Td is a mode of collaborative, interdisciplinary knowledge production aimed at contributing to real-world problems. It’s built upon two basic assumptions. One is that science can and should play a role in untangling societal dilemmas. And second, that a diverse knowledge base is needed to solve these problems. Inherent to those assumptions is that there needs to be an openness to crossing disciplinary boundaries and to finding ways of effectively working with diverse perspectives and key societal actors.

The way that we define the concept of Td can be mapped onto three questions: Who is doing Td? How is Td carried out? And why is it done? For the „who“, it is the mindset that researchers take into Td work. Td is not only the actions or a method, but also a state of mind. It’s an open acknowledgment of unpredictability in the process of research, but also in problem solving. We also call it curiosity driven pragmatism: At the same time that we are about knowledge production, it’s also about: Who has given us this project to solve a particular issue or contribute to a certain dilemma? That means we have to be pragmatic in the sense that ultimately we need to meet their original expectations of why they invited us to the table. Reflexivity is also an important element of this mindset.

Td is also about practices (“how is it done?”). For example, the Td tool box (developed by the td-net) is a collection of methods and tools, but I think at the core of this, Td is really about the acceptance of methodological pluralism and the need for knowledge integration. Depending on what the context is, you are going to need to open up that toolbox and recombine those tools. Also, for me, joint problem framing is a practice that defines Td. You need to have the freedom to question the initial impulse of a project or pursuit. It’s not just functional, product-oriented, it’s also about how the process is carried out such that you build capacity for reflexivity. The aim is to arrive at a greater understanding of the problem itself. Putting a spotlight on how collective learning can be enhanced is also key to Td practice.

The Td knowledge output (“why is it done?”) should somehow contribute to societal problems, which means going beyond academic literature alone in pursuit of generative knowledge, that is knowledge that others can use to build upon. So it’s not end point knowledge – it’s process knowledge that’s locally relevant and contextual. It is a combination of practical, tacit and theoretical knowledge. 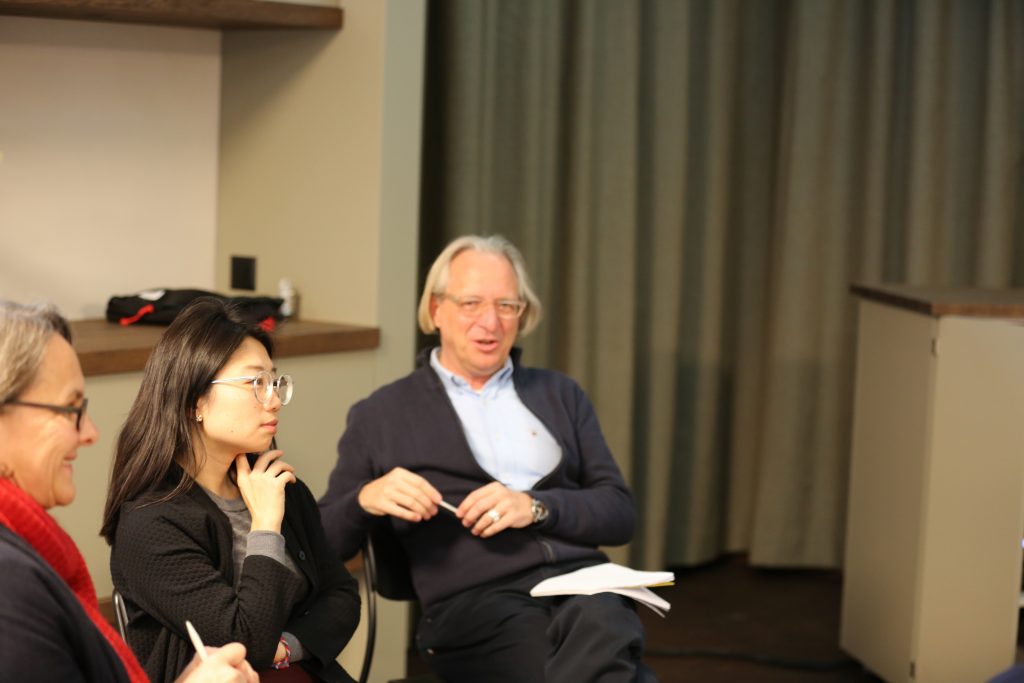 BinBin Pearce is a senior researcher and lecturer at ETH Zurich in the Transdisciplinarity Lab (profile). With a background in environmental engineering and design thinking, her research interest is in developing and evaluating methods for collaborative decision making. She is also an educator who has developed new curriculum and learning environments that enable students to critically challenge the world around them by building skills for insightful observation and problem solving.

Michael Stauffacher is one of three co-directors of the Transdisciplinarity Lab and professor at ETH Zurich (profile). His research always has a problem-focus, starting from a real-world problem and trying to disentangle its complexities by an integrative approach linking different disciplinary perspectives. Close interaction with societal actors is thereby of key importance, both in co-designing the research and co-producing knowledge throughout the whole process. He develops the field of transdisciplinary research further by conceptual and methodological contributions.

So you would say that Td research has an inherent normative dimension?

Pearce Td research does have a normative dimension, but it differs from action research in the sense that it’s not confident that it has the right view to push society forward towards. It’s not setting a goal, and then using its tools of research to help us move towards that goal. Td for me is the process, it’s a ground on which we can co-discover that goal. And create some kind of a reconciliation between different perspectives such that we can take effective action towards a goal. But our job is not to set that goal. Our role is in helping with processes, with openness, with reflexivity.

»The challenge is how to assess Td learning. Everybody agrees that Td learning is a good thing. But how do you make a test out of it?«

What do you see as blind spots in the Td discourse?

Stauffacher There are hundreds of blind spots. One of them is still the question of values. A second question, which is slowly starting to be developed, is the question of power. A third one is the whole question around fundamental big uncertainties. I am not sure if we have well reflected that, apart from saying that in the collaborative process, you can reduce uncertainties. And a fourth one: What can you learn from the uniqueness of the context for other or for similar cases? The discussion around that needs to be strengthened. What I see as very promising is to have a framework, a structured way of presenting cases so that one can really learn from them. That is the answer to several of the blindspots that I have just referred to. Maybe not the full answer, but certainly the way to go.

What role does Td learning play in the work of TdLab?

Stauffacher I would consider it as a unique thing of TdLab that from the beginning, Td teaching and learning has always been part of it. That’s why we learned different things with respect to Td research than other groups who have only a Td research focus. If I look back, I was engaged mostly in teaching and the things that I’ve learned about Td are different than what I observe with others. And this, I would argue, has to be related back to that I gathered my Td experiences in a teaching and learning context.

From your experience, what are challenges in conducting Td learning?

Pearce There are two things, one is the institutional acceptance and the other is the inherent challenge of conducting Td learning. Actually, within ETH, there was very little challenge institutionally. Institutions need new ideas for how to teach, so they’re looking for Td learning. But the challenge is how to assess Td learning, and that’s also a gap in the literature. Everybody agrees that Td learning is a good thing. But how do you make a test out of it? The contribution that TdLab has really made, in addition to conducting and realizing Td learning, is how to assess Td learning. We do this by putting your ability to be reflexive as one of the competences that you will be graded on. However, there’s a lot more that we need to do.

»Td learning provides one mode of learning that, through reflexivity and through other competences, gives students additional benefits that you wouldn't get just learning pages or reading journal articles.«

Would you argue that every student at ETH should have a Td course in the first year, no matter what they study?

Pearce I think it’s essential to offer all students the possibility of joining a Td course. But I don’t claim that all faculties and all students must do a Td course. I think if you are a theoretical physicist at heart, there’s no need for you to do any Td work. But I think it’s the responsibility of the university to provide that option. And I do think when you’re working on societal issues, then it would be important to be included.

What is the added value of Td learning?

Pearce We may have to start with the question: What do we want to achieve with higher education in general? If we want to educate people who need to be able to process tons of information and have access to information at their fingertips whenever they want, what is education for?

Td learning provides one mode of learning that, through reflexivity and through other competences, gives students additional benefits that you wouldn’t get just learning pages or reading journal articles. So the point is not, what is the added benefit of Td? I think the bigger question is: what do we need to have higher education achieve in the next century and what are the means by which we can do that? We see, based on our limited experience, that Td learning can help us get there because it asks people to be whole. It asks them to go beyond cognitive functions, to affective functions, for example, to also being able to perceive sensitively and to be aware of one’s own and others’ emotions. And if there are other approaches to achieving this, also good. The point is to be open to rethinking about what higher education should provide.

Do you see this rethinking about the purpose of higher education happening?

Pearce Yes, for example, student centered learning has even been an official principal of the Bologna process. But the question is, how do you implement new concepts in practice effectively. A challenge for realizing this rethink is that schools are not ranked on the quality of their teaching. The Td-ness or the interdisciplinarity-ness of their teaching, the richness of students’ experience, that’s nowhere in the rankings. So we’re looking at more of a systemic change that needs to happen.

»If your currency is impact in society at large – consider if academia is the path that gives you that currency.«

Which tip would you like to give to young scholars who are interested in the Td field?

Stauffacher I would recommend two things. One is: Do it! And if your supervisor doesn’t allow you to do it, still do it, maybe do it in your private time. And secondly: Build a community, a group of people that support you in doing that. If your supervisor does not support you or is even against it, then you still need a support group where you can exchange and learn from each other. Doing it without that support is a nightmare. So these two things go together: Do it, but do it only if you have a chance to be part of a group where you can exchange and learn from and support each other.

But isn’t Td the bridge between academia, but also having impact? Isn’t it a middle ground between both?

Pearce Yes, it could be, but let’s be honest: Td is in academia. It belongs to academia. You can’t survive in academia without being academic. You can be a Td academic, but you are an academic. That’s different from being a practitioner who wants to collaborate with a Td researcher. But as long as you’re a researcher and you’re an academic, you play the academic game. It doesn’t matter what topic. You have thrown your hat in the ring for academia.

There are different ways in which you can play the academic game. You can say, for example: My currency is not recognition alone. My currency is a combination of recognition and impact. And I’m OK with not having too much of either one. But I want both. Then you have lots of options open to you in Td. But if you’re somebody who wants all impact, that doesn’t make sense for you. Or if you’re somebody who really wants to maximize recognition, it also doesn’t really make sense. So you just have to know who you are.

So you would clearly say that there are no career paths in Td yet?

Pearce No, it doesn’t exist yet. It really is something to be created. Some people thrive under those conditions. It’s not a bad thing, but it’s good to know. A recognition of an uphill journey is the important thing.